After months and months of preparation, dozens of conversations, a bevy of emails, and a whirlwind of ideas catalyzed by an inspiring and fruitful creative collaboration, the orchestral song setting of my poem “Thorn Tree” was given its world premiere along with those of two other new orchestral songs yesterday afternoon at the McConnell Arts Center in Worthington.

The song settings were composed by Columbus composer Jacob Reed as part of “The Poet’s Song,” a project Reed created to unite poems and music in new art songs.

On a concert program entitled “The Words Beneath the Sound,” featuring musical works with sung or spoken texts, McConnell Arts Center Chamber Orchestra artistic and music director Antoine Clark conducted the world premieres of Reed’s songs, the world premiere of Christopher Weait’s orchestral song settings of Emily Dickinson poems Emily’s Bees and Bells, Walton’s Façade Suite No. 2 – with poetry by Edith Sitwell, and, on the occasion of the 100th anniversary of its world premiere, Stravinsky’s L’Histoire du soldat, with a text adaptation I wrote specially for this performance. Soprano Chelsea Hart Melcher was featured as soloist in the Reed and Weait songs, and, in my role as midday host of WOSU Public Media’s Classical 101, I narrated the Walton and the Stravinsky.

Funded jointly by the Johnstone Fund for New Music, the McConnell Arts Center of Worthington, and the Worthington Educational Foundation, “The Poet’s Song” project brought together many throughout the Worthington community.

As a guest artist, I worked with Thomas Worthington High School students on reading and writing poetry in two class visits. Students were also encouraged to participate in a poetry contest, which was judged by other members of the Worthington community, and the winner of which had his poem set to music by Reed and performed in yesterday’s concert. Poems by all of the 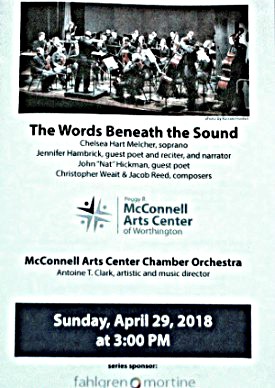 entrants in the school poetry contest were displayed along with musical sketches by Reed and Weait, on a “Wall for Sharing” in the lobby at the MAC. The project’s culminating performance, “The Words Beneath the Sound,” yesterday at the McConnell Arts Center brought a rich program of poetry and music before the Worthington community.

This project hit home deeply with me. I grew up in Worthington and attended the Worthington Schools, and I know how committed this community is to quality in education and cultural enrichment. Yesterday’s concert brought a rich offering of poetry and music before the Worthington community in combinations that had never before been experienced in that way. I left the performance with the feeling that we all had experienced something unique and exciting.

From its dissonant opening “thorn” chord to its intentionally unsettled conclusion, Reed’s setting of my poem “Thorn Tree,” like his settings of the poems by the 13th-century Persian poet Rumi and Worthington student poet Nat Hickman he selected for “The Poet’s Song,” explores the text’s emotional depth in rich, dramatic harmonies and sparkling orchestral color.

My deep gratitude to composer Jacob Reed for believing in my poem “Thorn Tree” enough to give it this sumptuous orchestral setting, to Antoine Clark for bringing me into “The Poet’s Song” project, and to the staff of the McConnell Arts Center for making the center an inspiring locus of creativity.