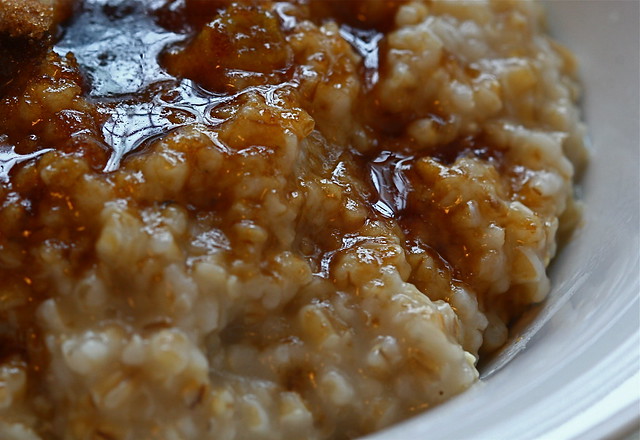 One possible reading here is that last year’s lingerie remains unworn because the interested parties skipped the skivvies and went straight to …  But the alarming candor of the text and the bluntness of the final line – “unworn” – suggest a far less rosy force at work in this senryu: The prospective wearer of the lingerie opted for a less romantic scenario.  And imagine that the lingerie was a gift.  One must then ask: When a man gives a woman lingerie, is the gift really for her?  Gage’s senryu tiptoes stoically through this treacherous terrain.  If we are to read a haiku as the expression of an observed moment in time – as, in essence, a wee snippet of autobiography – then Gage’s poem becomes as much confession as caveat emptor.

morning oatmeal
my daughter’s gloves warm
from the heat vent

Oatmeal, a child’s woolly gloves, a heat vent – this poem exudes coziness.  The gloves on the heat vent suggest winter and that the gloves and their wearer have been tumbling about in the snow.  Through three crisply drawn images, Gage at once implies the frightful winter weather outside and paints a picture of a family’s home and a father’s heart aglow.

Joshua Gage is an ornery curmudgeon from Cleveland.  His first full-length collection, breaths, is available from VanZeno Press.  Intrinsic Night, a collaborative project he wrote with J. E. Stanley, was published by Sam’s Dot Publishing.  His most recent collection, Inhuman: Haiku from the Zombie Apocalypse, is available on Poet’s Haven Press.  He is a graduate of the Low Residency MFA Program in Creative Writing at Naropa University.  He has a penchant for Pendleton shirts and any poem strong enough to yank the breath out of his lungs.