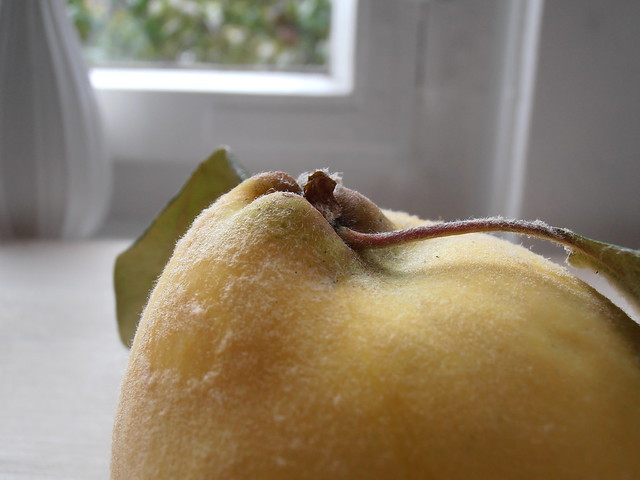 Julie Thorndyke writes about plump quinces and an overloaded bookshelf in today’s feature of the International Women’s Haiku Festival.

plump quinces
the velvet skin
of your memory

Like a plump quince itself, Thorndyke’s haiku changes texture the more you linger with it.  There’s a fleshiness, an implied juiciness to the “plump quinces” in the first line.  Then the second line unites the “velvet skin” of a quince with the fuzziness of the memory and takes us into a relational No Man’s Land.  What began as a seemingly luscious fruit poem ends on a dark note, or at least with a question mark: Did the fuzzy memory forget something of monumental significance to the poetic speaker?  Does it suggest the beginnings of dementia?  After this final turn, the tartness of even a plump quince continues to resonate in our experience – and to linger on our tongues.

overloaded bookshelf no gaps in my diary

The bookshelf and the calendar are so overcrowded that this poem has to be squeezed into a single line.  This poem is a deft reflection of lives crammed full of material goods and busy-ness, leaving no time to reflect and no empty space in which to do it.  If we find ourselves asking how we ended up in this hand basket, Thorndyke’s senryu at least hints at an answer.

Australian writer Julie Anne Thorndyke graduated with merit from the Master of Creative Writing program at the University of Sydney.  She has published poems and stories in many literary journals.  A winner in the U.S.-based Tanka Splendor competition in 2006, 2007, 2008 and 2009, she was also awarded an honorable mention in 6th International Tanka Festival Competition 2009 (Japan).  She facilitates a local tanka writers’ group, participates in collaborative poetry presentations and leads creative writing workshops.  Julie won the 2011, 2015 and 2017 FAW Pauline Walsh short story competitions.  Two collections of her tanka poetry are available from Ginninderra Press.  Her first picture book for children will be published by IP in 2018.  In 2017, Julie was appointed editor of  Eucalypt: a tanka journal by founding editor Beverley George. https://jthorndyke.wordpress.com/