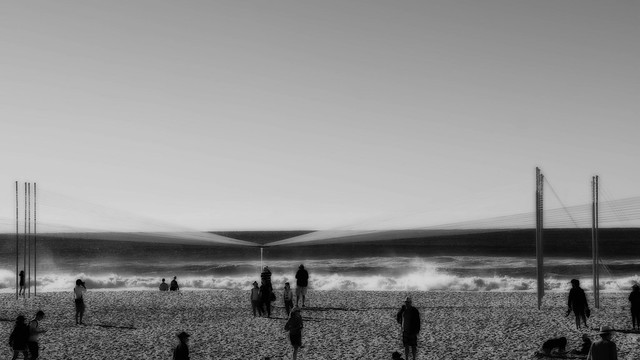 Beach bodies, goth girls, and Mom make their way into haiku by Mary Stevens in today’s feature of the International Women’s Haiku Festival.

selecting poems
at the beach
I edit the bodies

And, if we’re honest without ourselves, wouldn’t we have to admit that we do the same?  This senryu backs into the issues of our obsession with appearances and our pathological need to throw stones, even when we know we all live in glass houses.  That the poem comes close to being a campy ars poetica takes some of the sting out of its commentary about human nature.

The relational ground between a daughter and her mother is sometimes almost too treacherous to navigate.  My guess is that Stevens is right – no mother will ever see all of her daughter.  The mother’s expectations of and dreams for her daughter might blind her to the more valid reality of her daughter’s own self-realization.  And the daughter’s striving to show her mother what she has become, implied so effectively in this haiku with the image of “sun in my eyes,” takes on a tone of desperate futility.

The desire to be desired shows up here in the form of, I imagine, an adolescent girl who’s trying a bit too hard.  She may grow out of it or, if she doesn’t find the genuine love she really seeks, she may not.

Mary Stevens lives in the Hudson Valley, New York, among much wildlife.  A member of the Haiku Society of America since 2003, she presented “The Cicada’s Voice: How Wabi Sabi Can Teach Us How to Live” at the 2015 Haiku North America, Schenectady, New York.  She aspires to get out of her own way when writing haiku.